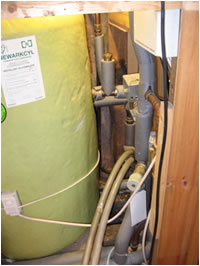 Heating systems installed since the mid-1970s have the pump, or the “heart” of the system along with motorised valves and controls fitted in the airing cupboard. It also includes the feed and expansion connections between the supply tanks in the roof. This setup is known as the airing cupboard configuration and it is the “busiest” area of the system.

The pump and motorised valves cause a magnetic field which attracts metallic debris, rust and sludge which then sticks to pipes in this area. These form hard blockages in pipework which often needs to be dismantled to remove them. This same process causes boiler noise because the principal flow is restricted and the cold feed becomes blocked. Right, a typical airing cupboard 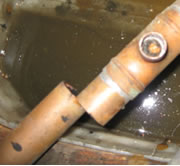 Above, from left: A typical hard blockage from an Airing Cupboard, Blocked Solid!! a Myson Aerjec
removed to the outside for a thorough clean. 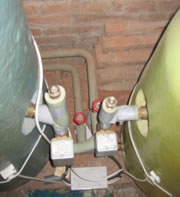 Reviews and thank you letters from many years of happy customers