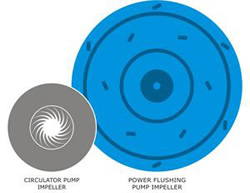 When Kamco introduced power flushing pumps in 1992, many heating engineers were unsure whether they were any improvement on the traditional gravity method (i.e. adding some chemicals, circulating them with the heating system pump, and then fill up/drain down repeatedly).

Twenty years later, most of the doubters have been converted – but not all, and we are still often told that a power flushing pump isn’t necessary, that the gravity method is good enough, or that all you need to do is use a large magnetic filter on the return to the boiler in conjunction with the system’s own circulator pump.

While this seems tempting as a cheap alternative, it is simply no substitute for the long proven technique of power flushing when it comes to a thorough and effective system cleanse.

There are three reasons for this: 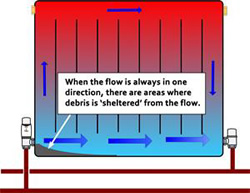 1. Scientific research has proved that the amount of debris removed is directly related to the velocity of the flushing water , the higher the velocity, the better the effect. A system circulator pump isn’t designed to move water at the high velocities needed to pick up and transport debris. A good power flushing pump will have a much higher flow rate generated by a large impeller to give the speed and the pressure required to dislodge debris. See fig1, top. for a comparison in size between a Kamco CF90 impeller and that of a system circulator pump. Without a high flow rate, heavier debris has little incentive to move, and so settles and compacts in radiators, which are generally the areas of lowest flow.

2. The water in a heating system has been circulating in one direction since installation, resulting in considerable quantities of debris being sheltered from the normal flow (see fig 2, centre). The only way to pick up and move this type of debris is to rapidly reverse the direction of flow through the system. The best power flushing pumps incorporate an instantaneous flow reversal device to ensure that fast flowing water penetrates all areas of the heating system and can transport the debris to a point where it can be forcibly discharged to 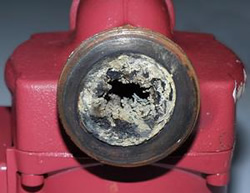 3. Given its significantly lower flow rate, dependence on a system circulator pump to carry debris around (and out of) a heating system can often be a case of ‘physician, heal thyself’. A circulator pump itself is a prime build-up area for debris as a result of the magnetic field generated by its motor (see fig. 3, bottom). This can reduce performance significantly from its normal rate, making it incapable of moving debris. A magnetic filter can only collect the debris that passes within a few centimetres of the magnet, and so without the assistance of a vigorous flow rate generated by a power flushing pump, accumulated deposits will remain static within radiators and pipe work, continuing to diminish the efficiency of the system.

5 Years Guarantee Get a quote